What’s really behind the decline of the west?

How did things go so horribly wrong in such a short space of time?

Recently I finished watching the re-run of the entire TV series ‘The Waltons’ for the second time (the third, if you count watching the original when it first aired back in the 70s).

Unless you’re over 45 you probably won’t have heard of the show but, in my opinion, it was amongst the best television ever made. Based on the real-life stories of its creator Earl Hamner, the show was the story of a large American family, in Virginia, during the Great Depression and the trials and joys that they experienced over that difficult time. Over its nine seasons it sensitively covered an extraordinary range of topics including the racial prejudice prevalent in the US at the time, family violence, women’s rights, antisemitism, pacifism, land rights, juvenile crime, religious differences, infidelity, and many others.

As you watch the show, two things are apparent as being core to the entire series. The first is the sense of optimism and hope that permeates the story – even at a time when you’d have thought there would be little to be hopeful about. The second is the centrality of the family’s faith to their identity and their outlook on life. While that faith is never laboured, it’s an ever-constant theme which shapes, and explains, everything which happens to them and directs their interactions with the people around them.

As a result, it’s impossible to watch the show without being uplifted by its humility, decency and its unshakable and enduring belief in a better future.

None of this should be taken to suggest that life in the 1930s and 40s was perfect, of course. Indeed, the smorgasbord of issues dealt with in the show, some of which I outline above, would suggest that it was not. But the key defining difference in western societies of that time was the role of faith in forcing individuals to confront their own shortcomings before looking for the faults in others.

Because of this, the show also provides a rare insight into just how far society has declined over the past ninety years. Whereas, in The Waltons, there was a tremendous sense of family, community, and goodness where each family member was determined to make him or herself a better person in respect of his status with God and his interactions with others – western society, today, couldn’t be more different.

Today, under the thin and superficial veneer of a society which claims to be concerned about the environment and human rights lurks a pervasive individual selfishness in which laws, institutions and social conventions are manipulated by those on both sides of the political fence in an effort to shape the world in our own image rather than that of the God who created it.

If you doubt that description – consider what we have become over the past 60 years in particular. We teach our kids that there is virtue in frequent and casual sex when they are young and that, somehow, the ‘right’ person will just emerge from this approach; we have confused them about the basics of sexuality and gender; we treat hardened criminals, including sexual predators, as ‘victims’, and look for ways to excuse them of personal responsibility for their actions; we have become desensitised to the portrayal of filth and violence of all kinds and we have allowed it to permeate our societies so completely that even a small child can easily (and regularly) be exposed to it; we have replaced empirical science around gender, climate and economics with bizarre ideology yet, alarmingly, these ideas endure and flourish despite most of them being nonsense; we slaughter our children in the womb, portraying it as a social good, and even those claiming to be ‘Christians’ claim the right to kill others in so-called ‘self-defense’; and we look for others to blame for our lot in life rather than looking within, to find the real source of most of our failings.

So, when did western society become so depraved? When did we become so obsessed with ourselves that the focus of our laws and institutions became more about what we could ‘get’ and what we are ‘owed’ than what we could contribute and how we could help others? And why is there so much anger and rage on both sides of the political spectrum?

How did it all go so horribly wrong? How did we reach this point – where we now call evil, good and good, evil?

In my article, last week, I talked about the various global initiatives which have been established by those trying to ‘control’ mankind and the strong response, against these, particularly from those on the political right. A cursory scroll through social media will quickly reveal the strength of anxiety about the goals of the World Economic Forum, the United Nations, and a host of other ideologically driven global bodies. In my article, I made the point that the idea of a ‘satanic’ power that pervades the world is entirely consistent with scripture but suggested that such movements have existed throughout history and that the groups or individuals who are the subject of our current focus may be distractions from our real enemies.

If you’re familiar with the Biblical narrative, you’ll know that such forces have been around since the dawn of time and that that’s actually one of the primary battlegrounds for which Judaism and Christianity were created.

So it was against this background that I took delivery of the latest book by Jonathan Cahn, earlier this week. Over the past few years Cahn has been a prolific writer on topics which address biblical prophecy in new and insightful ways – but his latest book, ‘The Return of the Gods’ was serendipitous in its timing. 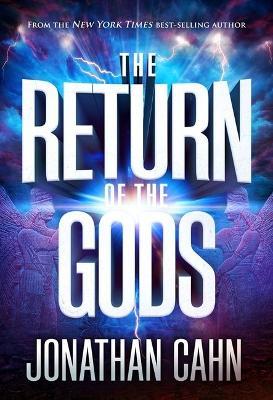 The book is a bombshell – and while much of what it covers is familiar, Cahn approaches the topic in a way that I have never seen done before. In 239 pages, he explains, in simple and clear terms, why western society has declined so quickly, how that decline started, and where it is taking us. Incidents and events which might previously have seemed unrelated suddenly come into stark contrast as obvious strands in a clearly coordinated approach – in fact, this aspect of the book is so compelling that I couldn’t believe that I hadn’t seen it before.

For me – the book is a gamechanger – not just in respect of the clarity of its message, but as a warning to how far progressed this agenda actually is.

The premise of Cahn’s book is relatively simple. He draws direct parallels between the demise of ancient empires and the current decline of the west and demonstrates that the sequence of events taking place is not just similar to those earlier civilisations – it’s identical. He then goes on to mount a convincing argument to propose that the specific players who brought about those ancient declines aren’t just models for what’s happening today – they’re the same entities.

In particular, Cahn describes three distinct entities which were active in the ancient past and which appear to be active again, today.

This may sound bizarre, but the exact parallels in the events taking place are simply too numerous to ignore – and while I appreciate and respect that not everyone who has read this far will be comfortable with the implications of what I’m saying – I’d encourage you to be open to the possibility of it.

If your curiosity has been piqued, and if you’re interested in reading Cahn’s book – you can do so by ordering it here. (I have no skin in the game – I just believe that everyone should read it).

Alternatively, you can go in the draw to win one of 5 free copies of the book by simply subscribing to my newsletter by typing your email address into the box below. The draw will close on 30 November, so don’t miss out.

It should be noted that Cahn’s book doesn’t entirely explain where the entities behind all this originally came from. To understand that, I’d encourage you to watch this video and this video from the late Chuck Missler. They’re a little older but will fill out your understanding of this important topic. There’s also an excellent book called ‘Reversing Hermon’, by Dr Michael Heiser, that you can order through most platforms. Both Missler and Heiser explain how these beings came into existence, that they are not ‘gods’ and that they have appeared in almost every culture, throughout history

The ramifications of Cahn’s message are alarming – but they’re also encouraging. While they paint a picture of a world that will continue to become even more evil – they also point to an ultimate showdown in which it will all be swept away by the One who is the basis of all existence.

Meantime, if Cahn is right, it’s not Klaus Schwab, Bill Gates, George Soros, the UN or any of a host of other international players you should be worried about. While these might all be willing puppets to a larger agenda – it’s those who are pulling their strings to whom you should turn your attention.

To that end, it’s worth ending with four obvious, but uncomfortable, conclusions which you will draw from Cahn’s book:

NEWER POSTThe hardest thing I’ve ever had to sell
OLDER POSTAre we being softened up for global government?