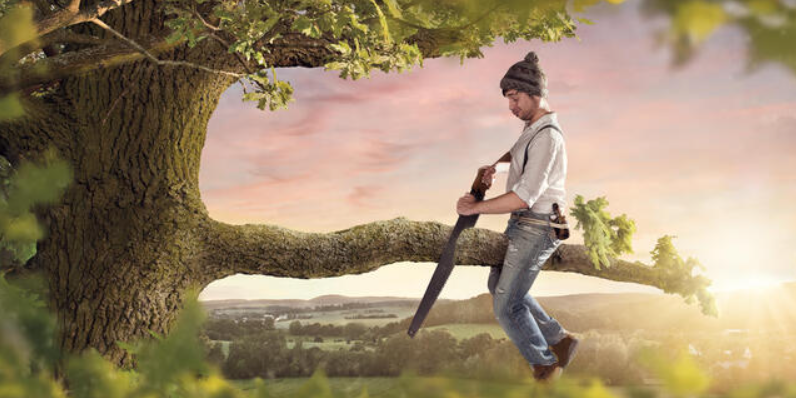 Do your actions align with your purpose?

Are you doing things to get you closer to your goals - or are you sawing off the branch that you're sitting on?

Most of us will be familiar with some version of the picture that I’ve used in this column. It cleverly depicts the act of doing something which might seem reasonable at the time but which isn’t in our greater interests.

At its simplest, it speaks to the self-sabotaging actions that we take in the process of trying to achieve our goals. Sneaking that snack when we’re supposed to be dieting, failing to study for that exam, buying a car with some of the money we’d put aside for a house – the list goes on.

In each of those examples, our failure to delay gratification potentially results in an undesirable consequence because we’re doing the opposite of what we need to do to be ‘successful’.

But sometimes, the results of our actions, or lack of action, are more serious – particularly when those actions don’t align with our bigger goals – the things we see as our life’s purpose. We assume that the ‘purpose’ of the guy in the picture is to remove the branch by sawing it off. But his actions don’t align with that purpose because, although the branch will eventually fall, he’ll probably injure himself in the process (or worse). Had he sat with his back to the trunk of the tree he’d have achieved his purpose without putting himself at risk.

If this all sounds very philosophical, it’s not – it has very real and pragmatic implications for all of us.

Recently, I had cause to face the consequences of this when I reviewed what I was doing with my own life. The result of that review was sobering and, for me at least, alarming.

Those of you who read my material will probably know that I have a very strong Christian faith that underpins who I am and what I want my life to stand for. However, you probably won’t know the more specific aspects of that goal – that I’ve been studying Bible Prophecy for over forty years; that I have very clear views on the meaning of those prophecies (particularly the Books of Daniel and Revelation) which are at odds with the mainstream Christian interpretations; that (if I’m right) the implications of that understanding are imminent and affect every person on the planet; that, as a result of these findings, I’ve become a passionate supporter of Israel and the Jewish people; and, that my primary purpose is to communicate my views on these matters, as well as my broader faith in Yeshua the Mashiach (Jesus Christ), as widely and as often as possible.

So, when I did my personal reality check, how did my actions line up with that purpose?

Frankly, not well. When I looked at what I was doing, relative to what I wanted to achieve – the two simply didn’t align.

By some measures, I’ve been very fortunate in what I’ve accomplished – particularly over the past 20 years. I’ve gained wealth, status, some measure of influence, a degree of notoriety and access to a variety of media platforms from which to express my views. Along the way I’ve rebuilt organisations, bought successful businesses, and gained the acquaintance and ear (and sometimes the friendship) of many of New Zealand’s prominent media personalities and political figures. I’ve also developed a large and loyal social media following through which I have been able to expound my various views on politics and the property market.

But while this reads well on a LinkedIn profile – it was superficial success and was at odds with what I really wanted to be doing.

On that front, I’d made little progress and the steps that I had taken toward the things that mattered most to me either weren’t producing results, or were languishing, uncompleted. My efforts weren’t nearly enough, and I knew it.

But even worse than this, the vast bulk of my activity and focus was on doing things that had absolutely nothing to do with achieving my life’s purpose.

To be honest, this was a big wake-up call. I’m 58 – so there’s probably less runway in front of me than behind me – and the prospect of leaving this world without having made any sort of meaningful difference is a sobering reality check.

As a result, I’ve taken action to change my priorities and balance so as to give much more time and energy to the things that matter to me and define my purpose. These include repositioning my personal website (the one you’re reading this article on) to focus on broader and more important issues than just political gripes; establishing a new organisation to host my prophecy views and (soon) publishing a book and a series of teaching aids to make those views simple to access. I’m also scaling back my non-faith activities so as to only do those things that make sense to my overall purpose and I’m also much more open in the profession of my faith and trying to be much more sensitive to the will of the One to whom all of these actions are dedicated.

That doesn’t mean that I’ve abandoned my other pursuits. Indeed, my mainstream and social media activity affords me a profile from which I can leverage discussion of other topics – but it does mean that I’m now much clearer about why I’m doing things and where my primary focus should be. It also means (I hope) that I’m taking a more considered and ‘Christian’ view of the other topics that I write and speak about and that I’m recognising my own fallen state and many flaws before pointing these out in others.

The process is far from perfect, and I regularly find myself slipping back into old habits and thought patterns – but it gets a bit easier each day and I can see progress where previously I saw none.

But what about you? Do you know what the primary purpose of your life is? If you don’t – maybe it’s time to start thinking about the answer to that question? If you do – do your actions and activities align with it? Are you moving a little closer to achieving the things that define who you are, each day? The things that will live on after you leave this plane of existence?

I’d encourage you to stop, right now, and answer those questions for yourself. That simple exercise might just transform your life.

NEWER POSTWhat if today was your last day?
OLDER POSTAre you facing your greatest fears?