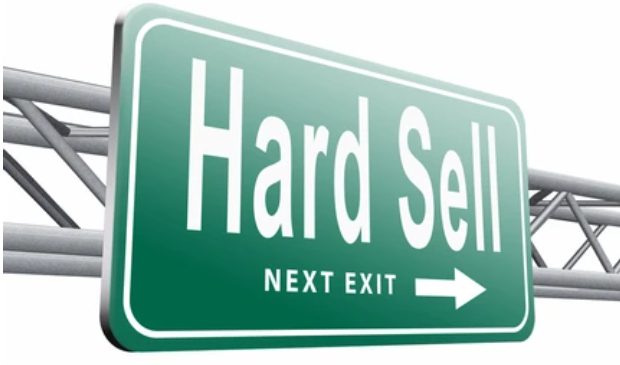 The hardest thing I’ve ever had to sell

In one particular session a well-known sales expert and motivational speaker was firing questions about sales at the audience and somehow his focus landed on me. After answering his first question about sales correctly, and then another, and another – I still recall, with some bemusement, how he then held me up, to the assembled audience, as an example of what they should all aspire to be, in sales.

But here’s the thing – I was a terrible terrible salesman and the last person anyone should have been seeking to copy. Oh, I knew all the theory. I’d read ‘How to Win friends and influence people’, ‘Think and Grow Rich’ and countless other books on what I was ‘supposed’ to do – but I was utterly useless at actually applying the theory to practical situations.

As a result, I bumbled from one sales role to another over a period of about seven years, before finally ending up in politics – a field to which I was much better suited at the time.

To this day, I’m not sure whether my lack of sales ability in those early days was due to a fear of rejection, innate laziness, or lack in belief in the products I was selling – or all three – but I can certainly recall the limiting impact it had on me and my own self confidence.

Obviously, I got over it. Anyone who knows me, virtually or otherwise, knows that these days, I have no problem ‘selling’ my ideas and that I articulate these, without fear, and with confidence and conviction.

In fairness, the fundamentals of selling have changed a lot since the 80s. Back then, selling was seen as an adversarial discipline in which there was a winner and a loser (at least in respect of the actual transaction) where sales training focused on teaching the salesperson to keep looking for opportunities to ‘close the deal’. Today, selling is much more about establishing a win/win relationship where the focus is about ensuring that needs of the customer are met – and this is far more suited to my own view of the world and the way things should work.

My sense of my own value, at least in a professional sense, has increased exponentially over the years. Whereas that shy young kid in the 80s didn’t really know his place in the scheme of things – my 58-year-old self has a clear understanding of the things that he does better or knows more about than others and focuses his energy on those. I don’t promote causes that I don’t understand or have strong experience in.

3.  I understand inputs and outputs

As I’ve become more comfortable with numbers, I’ve learnt how to use past and present performance as a guide to probable future results. This invaluable skill allows me to know how much effort I need to put into a pursuit to gain a desired outcome, and it’s an extraordinarily powerful tool that focuses your effort and makes any activity worthwhile, once you understand it.

4.  I don’t promote things I don’t actually believe in

As that kid in the 80s I had a crack at selling everything from Life Insurance and Car Parts to photocopiers, furniture and advertising. I was better at selling some of these things than others, but I always suffered due to a tendency to see the positive benefits of competitor products. These days, I only ‘sell’ ideas and products where I’m absolutely certain of the rightness of my cause or the superiority of the product or service I’m endorsing. That, coupled with the aforementioned self-confidence, means that ‘selling’, for me, is less about promoting something in the hope of a transaction and more about expressing a strongly held opinion. The difference is enormous.

But, despite all this, there are still things that I can’t sell.

Mostly this comes down to things where the points detailed above aren’t in evidence. For example, I’m not someone who can ‘get behind a cause’ unless I know the details of that cause inside out – so I’m not generally effective in projects where I’m on the fringes or have been brought in for impact. If I don’t understand and believe the message – I’m not going to be much use in selling it.

I’m also not good at promoting things where doing so would make me feel morally compromised. I’ve done many things that I’m not proud of in my life and lack the moral authority to lecture others on those same failings. For example, you’ll never hear me talk about the best way to raise kids other than in very general terms. I wasn’t a good father to my own kids, growing up – and I have no desire to appear a hypocrite by claiming to have any expertise on that topic, now.

But there’s one thing I still struggle to promote despite being more certain of it than I am of my own physical existence. I struggle to talk about my faith, to my family and friends.

As background – I’ve been a Christian for around 40 years and, over that time, have gained an extensive knowledge of the basis of my faith and the overwhelming evidence of it. Despite this, my lifestyle didn’t match my beliefs for a big part of that forty years and I’m very much The Prodigal Son when it comes to the story of the journey back to my Father.

This means that my family and friends have seen me at my worst and know many of the stupid things I’ve done and said over my lifetime – making it much more difficult for them to take me seriously on matters relating to their ‘destiny’.

For this reason, faith isn’t generally something that we talk about. They know I’m a Christian, they know that my faith is central to who I am – but while I talk openly about my faith to strangers, it’s essentially a taboo topic with those who are closest to me.

The reasons for this are pretty obvious. I love my family and friends and I know that, once I open that door, there’s no going back. If I obey the Great Commission they’ll either respond positively, or I’ll destroy or damage the relationship that we have.

And yet, the consequences of not doing anything are potentially devastating. If the life of a family member or friend was at risk, I’d gladly give my own life to save theirs – yet that’s exactly the situation they’re in if I don’t share what I know, with them.

It’s a dilemma that I’m currently working through, and I am determined, with God’s grace, to face it, in order to find a way to tell them the four things that everyone on the face of the planet needs to know before they die:

If you’re reading this and have faced and overcome this issue in your own life, I’d love to hear what you did. You can write to me at ashley@nzemail.com and, if your approach worked, I’d love to return to this column at some stage and add your practical advice to it (anonymously, of course).

For the rest of us who struggle with sharing our faith with family and friends, I hope that this has served to provide you with the comfort that you’re not alone and with the determination to address the issue.

“The message of the cross is foolishness to those who are perishing, but to us who are being saved it is the power of God” (1 Corinthians 1:18)

NEWER POSTShould dangerous humour be censored?
OLDER POSTWhat’s really behind the decline of the west?