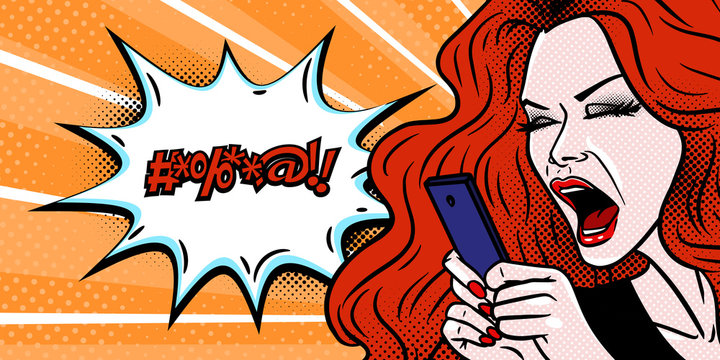 The two most powerful words in the English language?

Even in the 21st century, there are still words, and phrases, which are too taboo to discuss

TRIGGER ALERT: there are words and phrases used in this article which are known triggers, particularly for those on the left. If you believe you’re such a person, please don’t read any further.

In an age when information circles the earth in the blink of an eye and a video shot on someone’s cell phone can be viewed by more people, more quickly, than an ‘official’ news item – there are now few barriers to what we can see, read and hear.

Indeed, so pervasive is this avalanche of information that western Governments are grappling with the whole idea of free speech in an effort to try and find a balance between the free exchange of ideas and stopping people from accessing material which may be injurious to them or may cause them to harm others. Inevitably, that debate has turned to issues of censorship and is centred on subjective opinions around what is ‘offensive’ or ‘dangerous’ based on the prevailing views of those in power rather than by reference to any universally agreed value system.

But, overall, access to information is increasing rather than decreasing and, while the freedom to say and see some things is now under threat, the overall trend toward freedom of expression and access to information is now greater than it has been at any time in our recent history. For example, pornography, once hidden away in the corner of video stores and within the pages of ‘men’s’ magazines, is now universally accessible with few stigmas around any depraved practice other than paedophilia (and there are ongoing attempts to ‘normalise’ even that perversion: www.tinyurl.com/46xywb3p). Profanity (swearing), once a big no-no in ‘polite society’, is now so pervasive that it has entered the general lexicon of language and few words cause the shock that they may once have done. The ‘f’ word and the ‘s’ word are now freely used in conversation and media – and it’s only a matter of time until the ‘c’ word establishes the same status.

In respect of profanity, this more general acceptance may not necessarily be a bad thing. Afterall, ‘swear words’ are nothing more than a collection of (usually) 4 letters and their power to offend us in the past was by mutual social agreement rather than any real power inherent in the words themselves.

But there are other words, and phrases, which still stigmatise sections of society and upon which discussion is heavily restricted, not by the weight of law but through the power of social conditioning. Taking a ‘pro-life’ position in a conversation, suggesting that ‘male’ and ‘female’ are the only biologically and scientifically ‘real’ genders, or opining that climate change may not be the result of carbon usage are all guaranteed ways to be quickly drowned out by hysteria and personal attacks. The concepts of ‘a women’s right to choose’. ‘gender fluidity’, and a climate crisis caused by carbon emissions are all examples of concepts which are so ingrained in the public psyche that any challenge to these ‘articles of faith’ is met with overwhelming condemnation and their proponents labelled as ‘anti-women’, ‘transphobic’ and ‘climate deniers’.

So powerful are these terms that most prefer to avoid debate rather than invite the full force of social stigma – and even those who are brave enough to question these concepts tend to use euphemisms to qualify their ideas in a way that reduces the vitriol targeted toward them.

But, believe it or not, even the response to these words is mild compared to the two words which are guaranteed to trigger a stronger response than any others in the English language: Jesus Christ.

Unless it’s being used as a profanity, this simple two word phrase is guaranteed to elicit a response in everyone who reads it – and in 2022 that response is far more likely to be a negative one. Indeed, the physical reaction to these two words is so strong that some of my readers simply won’t be able to continue reading beyond this point. If you’ve had such a reaction but have managed to keep reading – well done. You’re certainly not alone in that reaction – but have you ever stopped to reflect on just why that response is so strong? Why does the mere mention of the most important historical figure in human history trigger so many people?

Have you ever watched a TV show or even a live show where a group of people have been hypnotised and instructed to respond to certain words in certain ways upon reawakening? The subjects are then woken and, in due course, the magic phrase is used causing the subject to undertake some bizarre behaviour for the entertainment of the audience. No, I’m not suggesting that we’ve been hypnotised in the classical sense – but there are certainly some parallels to this phenomenon in that our behaviour and the strength of our reaction to the words ‘Jesus Christ’ isn’t reasonable in the context of the words themselves.

Certainly, some might argue that the reaction is a response to other influences. The hypocritical actions of Christians themselves, a fear of being ‘preached at’, or even that it is the result of something traumatic which they experienced as a child. I don’t doubt the sincerity of any of these – but they don’t explain why the response is so universal and so strong. Clearly something else is afoot.

For me, the reason is simple, and can best be demonstrated by reference back to those earlier terms that I used as examples. When someone is attacked for being ‘pro-life’ or for advocating the reality of ‘male and female’ genders, it isn’t really the words that their attacker is reacting to – it’s the beliefs and potential call-to-action that underpin those words. So the attacks aren’t based on evidence, they’re based on fear. Fear that the person using those words might know something that they don’t, fear that the challenge will undermine the house of cards upon which their beliefs are built, fear that they might be wrong. In that context the response is entirely understandable: if you don’t listen, your worldview can’t be challenged.

So now apply that to the words ‘Jesus Christ’. It isn’t the words that challenge us – it’s the implicit obligation that they carry within them. What if he’s real? What if what he said of himself was true? What if we’re wrong? For most, the implications of that self reflection are simply too great and it’s easier to reject it and to flee than to face the consequences of such reflection.

You may not like the implications of that challenge – but at least you’ll understand it the next time that it happens.

There’s an irony in all of this in that ‘Jesus Christ’ isn’t actually the name of the historical character that we’re referring to when we use those two words. ‘Jesus’ isn’t a Hebrew word. It’s a Greek transliteration of the original name which was either ‘Yeshua’ or ‘Yashua’ (there are only consonants in Hebrew so vowels are inferred). The name was rendered as ‘Iesous’ from relatively early and wasn’t rendered as ‘Jesus’ until the 16th century – something we can know with certainty because the letter ‘J’ wasn’t invented until 1524. Put simply, the most accurate anglicised translation of the name, today, would be, not Jesus, but Joshua.

And ‘Christ’? Well that’s not even a surname, it’s a title. It’s another Greek word which means ‘Anointed’ and is a translation of a Hebrew title which meant the same thing: ‘Mashiach’ (or, as we render it in English, ‘Messiah’).

So, the historically accurate name of the man who has dominated world history for the past 2,000 years is, not ‘Jesus Christ’, but Yashua the Mashiach.