An Open Letter to the National Party

On Tuesday you will, once again, chose a new leadership team - and this time, it's essential that you get it right 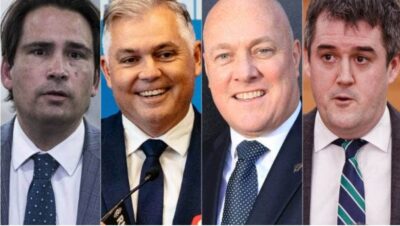 Last year I wrote to you imploring you to hold your nerve and stick with the leadership of Simon Bridges. You chose not to do that and, instead, chose a course, the consequences from which the Party still hasn’t recovered.

On Tuesday you will, once again, chose a new leadership team. This time, it’s essential that you get it right.

I’ve been a National supporter for most of my life. I stood as a candidate for you in the 80s; brought one of your most effective (former) MPs into the Party in the late 90s and ran her first campaign; have served on various Party committees in the past; and have provided advice and support to your people over more than twenty five years. I’ve done that because – like hundreds of thousands of kiwis – I believe in the core values of the National Party: strong families, traditional moral values, individual responsibility, reward for hard word, sound Government, lower taxes, and equal opportunity. These are the values which built our nation and which are now under attack like never before.

The current Government is the worst of the modern era. It has divided our country, assumed draconian powers out of all proportion to the requirements of the Covid pandemic, massively driven up public debt (and then systematically squandered eye watering sums on frivolities), rammed through new policy and laws which place ideology ahead of pragmatism and the public good, and repeatedly demonstrated a lack of the kind of wisdom which is required to balance the responsibilities of Government in a way which is fair to all.

It is an environment in which the National Party should have been dominating in the polls and in which your manifesto of clear alternatives should have been on show for all to see. That we have seen neither is a shameful indictment on your failure of the past 20 months and a reflection of how far a once great party has fallen from it’s recent past. As a result, the public have abandoned you – evidenced, most dramatically in the strong rise in support for the ACT Party. Most kiwis would have no idea of what ACT stands for and their rise in popularity in in direct proportion to your failure to articulate a credible alternative. It says far more about their lack of confidence in you than it does about a strong rise in support for ACT policies.

Fortunately, it’s not too late to fix the issues facing you and restore the faith of middle New Zealand – so here are some leadership traits that you may like to consider as you ponder that decision.

In particular, I would encourage you to choose:

Someone who can restore your conservative credentials
The National Party is the natural home of social conservatism in New Zealand and, as such, has been a safe haven for the votes of millions of kiwis over the past several generations. It is this, more than anything else, that has made National the natural party of Government for our nation and this is no less true today than it was 50 years ago. The centre of New Zealand politics moves around a little – but not so much that you should be experimenting with your core values or depriving kiwis of a home for these votes.

Someone who will purge the Party of so-called ‘progressive’ policies
The insidious idea that National should become ‘Labour-lite’ is naïve and inevitably self destructive. It is indicative of a cancer that has infected your Caucus and needs to be excised at the earliest opportunity, before the rot infects the entire tree. There’s nothing wrong with ‘progressive’ policies in the true sense of that word – but in the current lexicon, ‘progressive’ has become code for moral ambiguity and a slide into the politics of confusion. Centrist voters look to National for an alternative to the current madness, not a milder version of the same. They yearn for a return to stability and consistency and an end to social experimentation and the elevation of the interests of special interest groups over other kiwis. Reminding yourselves of this is the first step back toward regaining the trust of middle New Zealand. By all means protect the rights of all kiwis – but don’t demonise (or support legislation against) those of us with a less extreme worldview. I understand that at least one of those who is leading the charge on this nonsense, in your Caucus may be in consideration for leadership. Frankly, I’d question whether that person should even be in the Party, let alone being considered for leadership.

Someone who will tell the public what National would do differently
I can count, on one hand, the number of Labour initiatives that you have come out and said you would unequivocally repeal. Frankly, that isn’t good enough. If you’re not against the draconian policies of this Government – you’re for them – and kiwis will judge you accordingly. The first thing a visitor to your website should see is a rollcall of the things you would repeal and the positive changes that you would make in their place. These should be repeated as talking points in every speech, communication and media release. Right now, no one knows what you stand for.

Someone who will stand up for the important stuff
There are some things which are so central to National Party values that, in normal times, they wouldn’t need reinforcing. But your position has been so fluid on so many issues that even some of these basic beliefs now require a firm affirmation so that the public can be sure of where you stand. The absolute right to free-speech except when it involves incitement to violence, the right of Israel to exist and be supported, the importance of the rule of law, and the preeminence of democracy over ideology – these are all values on which you need to clearly re-affirm a position so that there can be no doubt where National stands. Because again, right now – no one knows.

Someone who will show zero tolerance for racism
National is the Party which put the Treaty settlement process on track in the 90s and has been the Party which has insisted on tangible outcomes, for Maori, in successive social investment initiatives. It is the Party which has proved itself to be aspirational for Maori achievement and self-determination and has been prepared to take the hard decisions to lift Maori stats. As a result, your credentials in this space are unrivalled. But right now there is an insidious racism sneaking into the grassroots of the Party throughout the country. Some of this is a reaction to the racist overreach of the current Government in its approach to race issues – but the cause is irrelevant. Ethnic labelling, denigration of Te Reo (which is an official language), and policy proposals which seek to turn the clock back on race relations are all unacceptable and need to be snuffed out at the core. Yes, there are extremist elements within the Maori sovereignty movement – but there’s nothing new in that – and responding to it with equally extremist rhetoric is a recipe for the unravelling of your good work over thirty years. Racism can have no home in the National Party.

Someone who can show us a pathway back to unity
The current Government has sown more division and discord in 12 months than most of us have seen in a lifetime. It isn’t who we are and only National can repair it. Look beyond partisan politics when you speak to the nation, remind us of what unites us, appeal to our sense of ‘kiwi-ness’ and tell us how you will get us back to who we were, as a people. Give us confidence that there is an end to the current nightmare.

Of course, all of these things will rise, or fall, based on who you select as a leader on Tuesday. You could, once again, defer to the banal rantings of the media pack and the rarified opinions expressed on the beltway. Or, you could exercise integrity and wisdom and elect a leadership team which epitomises the values I’ve outlined in this letter. But make no mistake – whatever you do this time round will determine what happens to our country over the next decade. The two possible futures ahead of us are stark and divergent and only National can tread a path for all kiwis.